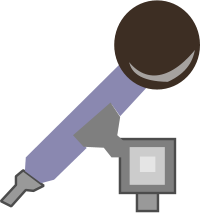 Speech and Camera tool is available on the Messaging tab of the top toolbar, and is represent on the toolbar with the “Speech” icon.

• broadcast the teacher’s voice from a microphone (or other recording device) to students;

The Speech tool is available only in modules for Microsoft Windows.

To use the tool, please select students in the connections list, then click the “Speech” button on the “Messaging” tab of the main toolbar. In the appeared window you can select an initial mode of the tool (the mode can also be changed and customized later, within the speech session):

Speak – teacher speaks to students, the voice recorded from a microphone is playing on student computers

Play System – plays the system audio of the teacher computer on student computers. The system audio is the sound that is currently playing on a computer.

After selecting the mode, the “Speech” tab appears at the bottom of the main window:

The top toolbar of the Speech panel provides access to the commands and features of teacher computer:

Microphone – turns on the microphone on the teacher computer and broadcasts the sound to student computers. As the microphone, Net Control 2 uses the default audio recording device, as it set up in the Windows sound settings.

The “Microphone” and “System” modes are mutually exclusive, only one of them can be used at a time.

Camera – turns on the web camera connected to the teacher computer and broadcasts an image from the camera to students. The default recording mode is 640×480 or closest.

The Users panel (on the left) contains a list of students that participate in the speech session. If you need to add new students to the session, just select them in the connections list (on Connections tab) and then click the Speech tool button on the top toolbar again:

The mode of each student in the list may be configured independently, you can turn on or off the necessary features individually for each student.

To enable or disable certain functions for a specific user, you can use the buttons at the right side of the student item in the list.

To enable or disable functions for several users at the same time, just select students using the checkboxes at the left of the student’s name, and then use the respective buttons of the “Users” panel’s toolbar:

Clear selection – resets the selection of users in the list

Invert selection – inverts the selection of users in the list

Microphone – turns on the microphone (or other “default” recording device) on the student computer.

System – turns on the capture of the system sound on the student computers.

Camera – turns on the web-camera connected to the student computer, and displays an image from the camera on the teacher computer.

1, 2, 3, 4 – enables or disables membership in the respective conference group.

Play – turns on the playback of the sound from the teacher or other student computers.

Record – enables recording of the received audio from the student computer and saves it to a file.

Broadcast and playback of the sound.

With the Speech and Camera tool, you can customize features for each participant in the session individually, just by turning on or off the necessary sources (devices) and enabling or disabling the playback.

For example, to play the teacher’s voice on student computers, you need to turn on the microphone in the teacher panel (the top toolbar of the Speech tool), and to enable the Play feature for those students in the list, who need to listen to the teacher’s voice. Respectively, for the students who should not be able to hear the teacher, the “Play” feature should be disabled.

When you are selecting the initial mode at startup of the tool, the respective features will be enabled or disabled by default, depending on the selected mode.

By default, when you are turning on the microphone on student and teacher computers, the teacher can hear all students, but students can hear the teacher only and cannot hear other students.

When a web-camera is enabled on student and teacher computers, the teacher can watch all selected students (images are appearing in the central part of the Speech tool panel), but students are able to see only one, the “source” computer. The source computer is marked by the following icon:

An image from the teacher or another “source” computer is displayed on student computers in a small window at the top righthand corner of the screen. Students cannot close this window, while the session is in effect and the camera “source” is selected and enabled.

To record a sound from student computers (the microphone or the system sound), just click the Record button in the user list. The audio is recorded in MP3 format and saved in the My Documents\Net Control 2 folder under the name of the computer from which the recording was made, with the respective time stamp.

The performance of the tool (refresh rate of the camera image, delays in voice/audio transmission) depends on the number of participants in the session, network load and latency, configuration of the hardware.

Small delays in the transmission of the voice or sound (about 1 second) are acceptable and inevitable, due to peculiarities of the sound capture, compression and transmission technology.

When the tool should be used in sessions with a large number of participants (above 15) or in loaded networks, multicast protocols may significantly reduce the network load and sometimes to increase the performance of the tool. To change the protocol, please open the teacher module settings (N – Options – Options), the “Commands” page:

in the “Speech and Camera” section, select the necessary protocol and click OK button.

Unicast is the default protocol that is recommended for the most of situations.

Multicast generates less network traffic and provides better performance on busy networks or when the tool is used in sessions with many participants.

UDP Broadcast is an alternative to Multicast, when the Multicast protocol is not supported by the network configuration.

To close the speech session, just close the Speech tab at the bottom of the main window of the teacher console, or click the Close Session button in the top-righthand corner of the Speech panel: